The Sawyer Story: Inside Your Airport

Marquette County’s aviation story had a rocky, but exciting start with a nearly disastrous exhibition in 1912. It involved a Benoist aircraft which had arrived from Chicago in crates on a railroad car. After the parts were bolted together at the local fairgrounds an overflow crowd retreated to allow for takeoff, and shouts of “He’s off!” were heard as the aircraft became airborne. Spectators were thrilled at the Benoist circling gracefully 1,100 feet above, however crowding of the landing area forced the pilot to careen over a fence and bend the propeller upon landing. The plane was subsequently taken apart, crated up, and shipped back to Chicago.

In the following years, local and visiting aircraft landed in various places across Marquette County until the first official county airport opened in Negaunee Township in 1937. Over a decade passed before scheduled air service began in 1948 followed one year later with the airport moving to the Sands Location south of Marquette. There it remained until 1957 when the U.S. Air Force leased the location.

In 1994, after almost 40 years of operation, the U.S. Air Force base closed. This eliminated 4,600 military and civilian jobs and left the county with a small city containing dozens of buildings, their contents, utilities, a 12,700-foot runway, and a vast expanse of land. In 1999, Sawyer International Airport officially opened and was soon a strong economic force in the central Upper Peninsula.

The first commercial air carrier incoming flight – Northwest 2961 from Detroit – to Sawyer International Airport landed at 11:30 a.m. on September 22, 1999. Thousands of people showed up for the ribbon-cutting, speeches, music, blessings, fly-ins and flyovers, tours of historic aircraft, refreshments, and one very surprised Texan who received a warm welcome and gift basket as Sawyer’s first arriving passenger. There were three departures earlier that morning, however the spotlight was on the first plane to land.

Over the years, Sawyer hosted five U.S. presidents and an amazing selection of some of the world’s largest aircraft. One of these aircraft was the world’s 2nd largest passenger airplane – a 600-passenger Boeing 747-8. In comparison to the first flight in Marquette County this aircraft is ten times faster and ten times longer than the 24-foot long Benoist.

A quarter of a million people (80 percent of the U.P. population) live within two hours of Sawyer International Airport and entrance roads from three different directions end at the terminal. Since the first Sawyer flight in September 1999, over two million airline passengers have passed through the terminal. The airport currently offers over 3,000 seats a week to the major hubs at Chicago, Detroit, and Minneapolis-St. Paul. Passenger totals have averaged 105,000 a year, with a record high of 133,681 in 2007. Sawyer continues to be the busiest of the Upper Peninsula’s six commercial airports and its 2018 share of passengers was 37 percent. 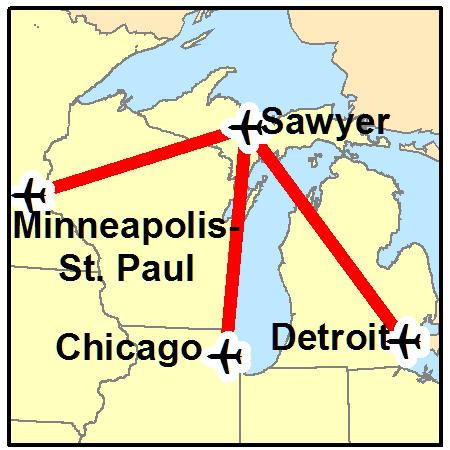 The two largest legacy commercial air carriers in the world serve Sawyer: American Airlines and Delta Airlines. American provides non-stop service to Chicago O’Hare, the country’s third busiest airport, and its flights have the only first class seats in the Upper Peninsula. Daily round trips to Chicago take about 45 minutes from lift off to landing. Once in Chicago, Sawyer flyers can find connections with 48 airlines offering non-stop service to 238 destinations.

Delta provides flights to Detroit and Minneapolis-St. Paul. The Detroit hub offers 20 airlines and 147 non-stop destinations while Minneapolis has 17 airlines and 163 non-stop flights. With the thought of saving money, some people choose to drive to other airports where Sawyer passengers could be arriving in London, Paris, or Honolulu before the others are even settling in for their departing flights.

There is more to Sawyer than just scheduled air carrier service. The vast campus is bustling in all sectors with over five dozen businesses employing 1,200 people. Sawyer has many hangars and support buildings either sold or leased. Nearby is the residential side of the former air base, home to over 3,000 residents. Complementing the many services currently provided is a challenging 18-hole golf course for those wanting to test their skills.

service to Chicago. Envoy Air flies under the American Eagle brand operating more than 150 planes on nearly 1,000 daily flights to over 150 destinations.

Another senior tenant is Superior Extrusion, Inc. (SEI), a national leader in extruded aluminum products used in everyday life. With its hydraulic presses, SEI makes aluminum parts for vehicles, docks, trailers, boats, and many other end uses. Their primary parts are automotive, such as running boards for pickups. With a recent expansion, another press was added and a need arose for a larger work force bringing total employment to about 160. To date, SEI has produced and shipped over 300 million pounds of products to market since startup.

Sawyer’s long runway can safely handle all kinds of aircraft, averaging over 50 operations a day, and is supported by Boreal Aviation, the current Fixed Base Operator. Founded in 1998, Boreal has worked with a Who’s-Who of big jets, with over half a dozen presidential aircraft. Located on the south end of the airfield, Boreal’s ten acre ramp and 8,900 square foot facility serve planes and pilots with fuel, de-icing, maintenance, a pilot lounge, supplies, courtesy car, and other amenities. Air cargo, a critical aspect of Sawyer’s operations, is supported through UPS, (Ameriflight), FedEx, (CSA), Alpine Air, Freight Runners, and both airlines. Sawyer routinely handles hundreds of tons of cargo annually.

High on the list of Boreal’s unforgettable days involved two big charter jets which were re-routed to Sawyer during the 9-11 crisis when all air traffic was grounded. Boreal had to deal with hundreds of puzzled and perplexed passengers who didn’t learn what had happened until they deplaned in the middle of Marquette County.

Wide open spaces, abundant snow, and experienced staff make Sawyer an ideal spot for testing aviation and snow removal equipment. Regular visitors from the Korean Aerospace Industry, AgustaWestland Helicopter , and a U.S. Army crew from the Redstone Arsenal in Alabama perform in-air icing tests for helicopters. The U.S. Army assists aircraft manufacturers get certified in icing flight operations. Their primary role is making ice clouds by spraying water mist from a lead helicopter for aircraft to fly through, this process allows manufacturers to design for ice accumulations. Visiting crews of up to 60 people spend an estimated $2 million locally as they rent hangars, cars, and motel rooms, eat out, shop, and sightsee for several months each winter. County residents may even see the aircraft maneuvering high above their neighborhoods.

Just north of the terminal is the 110-foot high air traffic control tower, an important bonus from the former air base. It’s not just the only tower in the Upper Peninsula, but the only one in the 350-mile east-west gap between Duluth and Traverse City, and the 300-mile north-south space between Green Bay and Thunder Bay, Ontario. The controllers direct air and ground traffic for scheduled airlines, private planes, cargo carriers, charters, military aircraft, helicopters, medivacs, and some of the world’s largest flying machines.

In addition to the various presidential aircraft and some of the world’s largest passenger planes, Sawyer drop-ins included the Antonov 124, one of the world’s premier cargo hauling aircraft. There were others, such as the monster Galaxy C-5 military cargo aircraft, the 747 plane from the Die Hard movie, and many other big cargo carriers, both civilian and military. They fit right in at Sawyer.

The long runway and wide-open spaces are just right for businesses that need the perfect place to test their equipment. In addition to frequent landings and practice touch-and-goes by both military and civilian aircraft, there is plenty of ground space 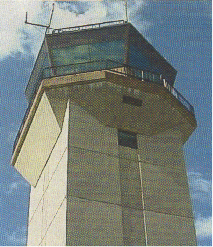 as well. Makers of snow removal machines, for example, have leased facilities and commercial space to test snow-removal equipment without fear of causing damage. “They love our snow,” said an airport official. “There is no hidden junk, no hydrants, no mailboxes, just a big open area with no danger of hitting anything while blowing snow over 150 feet.”

Approaching the terminal from one of three access highways, drivers find a large fenced parking lot with many spaces only a few feet from the door. Inside the terminal are ticket counters and baggage check stations, a large seating lounge, a secure waiting area at the gates, a snack bar operated by Northern Michigan University’s dining service, no less than eight car rental agencies, and an Aviation Wall of Honor saluting local war heroes and aviation pioneers.

Sawyer passengers have the convenience of jet bridges to keep them from the weather so travelers are never exposed to the elements. Once aboard, passengers and crew appreciate Sawyer’s long runway, 9,070 feet – enough room to accommodate nearly every type of aircraft ever built. Sawyer’s runway is the longest in the U.P. and third longest in Michigan (after Detroit and Grand Rapids). 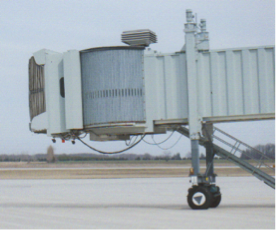 Owned by the local taxpayers, Sawyer International Airport is an economic engine for the central Upper Peninsula. Its economic impact is enormous. A state transportation study showed that Sawyer supports about 3,500 jobs through airport operations resulting in over $140 million in payroll and many millions in various taxes. It’s been estimated that visitors who arrive via the airport spend almost $500 per visit.

In 2019, the Michigan Department of Transportation named Sawyer International Airport as the state’s Airport of the Year for its “sustained excellence and contribution to aviation progress in the Michigan.” Along with this prestigious award, Airport Manager Duane DuRay was also named Airport Manager of the Year.

It should be noted that Sawyer is the only U.P. airport not eligible for the Essential Air Service (EAS) federal subsidy created by the U.S. Congress to assure air service to communities that could not support it on their own. In the year 2018, EAS subsidies for the other five U.P. airports had totaled $13.8 million, or $76 per passenger.

Veteran travelers who know that air fares can change daily, even hourly, successfully search the internet to find the best prices. They move departure and arrival flights by a day or two, or within the same day, and are aware of studies that show the best times to buy tickets and the cheapest days to fly. It takes a little time, and a little patience, but it’s worth it.

And the internet is full of advice.